Here are our projects 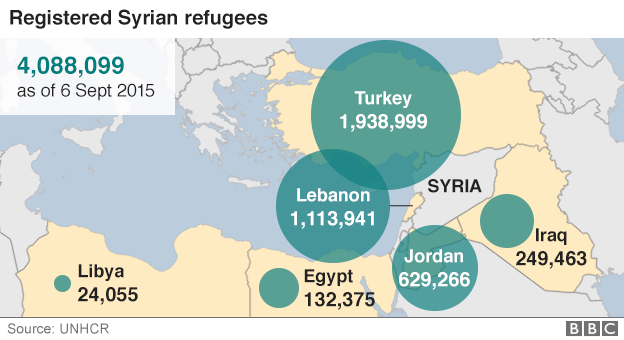 Since the beginning of the civil war in Syria, now in its fifth      year, more than 4  million refugees have fled the country while  nearly twice as many have  become internally displaced.

Hundreds of thousands of these refugees — and others fleeing  threatened  areas in the Middle East, Africa and elsewhere —  are on the move, taking  perilous journeys by land and sea after  setting their sights on a better future  in Europe. The result has  been the biggest refugee crisis the continent has  experienced in  decades.

According to the Office of the United Nations High  Commissioner for Refugees, there are nearly 4.1 million  registered refugees from Syria. Some countries have opened  their doors, hearts and pocketbooks to varying degrees. Others  have hoisted barriers to the migrant tide.

Here is a look at how the refugee crisis has unfolded in some of  the key countries in the region and beyond:

LEBANON has taken in 1.1 million registered refugees and others who are not registered. Government officials put the overall number at 1.5 million. With an estimated population of about 4.5 million, Lebanon has the highest per-capita number of Syrian refugees, accounting for about 1 in 4 people in the country. With half a million Palestinians remaining in refugee camps established six decades ago, the government has been reluctant to set up formal refugee camps for the Syrians.

Tens of thousands of migrants fleeing war and poverty are trying to reach safety in Europe. This summer’s unprecedented exodus from Syria, Afghanistan, Eritrea and other nations in turmoil has inundated southern Europe and exhausted the generosity of countries suffering their own economic woes.

JORDAN says it has taken in 1.4 million Syrians, although the UNHCR counts 629,266 registered refugees. Jordan prides itself on its hospitality toward these and other refugees, but the high numbers — about 20% of the population, based on government figures — have taxed the small kingdom, already struggling with strained resources such as energy and water.

TURKEY has taken in the most refugees of any country and is home to more than 1.9 million Syrians who have crossed the border. About a third live in government-run camps near the border whereas others have dispersed. According to rights organizations, the Syrians in Turkey do not enjoy full access to legal safeguards protecting refugees, but in recent years the UNHCR has been given more access to the refugee camps.

ISRAEL is the only country sharing a border with Syria that has not taken in any Syrian refugees. Israel has extended humanitarian aid and medical treatment, including in Israeli hospitals, to more than 1,000 people injured in the fighting in Syria in recent years but has said it will not take in refugees. Israel and Syria do not have diplomatic relations.

QATAR, the UNITED ARAB EMIRATES and SAUDI ARABIA are increasingly criticized by rights organizations, which say the wealthy Persian Gulf countries have not offered to take in even one Syrian refugee. The nations have contributed to humanitarian aid, some generously.

GREECE does not share a border with Syria, but the relatively short sail from Turkey has made it a prime destination for hundreds of thousands of migrants from Syria and other countries. Nearly a quarter of a million refugees have landed on Greek shores this year after perilous sea journeys, overwhelming a number of islands where physical and administrative infrastructure are insufficient. Most aim to use Greece as a land bridge through the Balkans and into Northern Europe, but a small number have been given temporary housing in Athens.

ITALY is the second immediate destination of most Mediterranean migrant voyages and more than 110,000 refugees have arrived there this year. As with Greece, many opt to use the country as a bridge to wealthier, northern countries.

THE UNITED STATES has spent more than $4.1 billion since 2012 on what it calls the Syria Humanitarian Response, supporting food programs and refugee operations in Jordan and Lebanon. However, the U.S. has taken in only about 1,500 refugees from Syria, prompting criticism from rights organizations and others. U.S. officials say the country is looking for ways to improve its response to the crisis, and they cite lengthy vetting and screening processes intended to keep out terrorism operatives.

AUSTRALIA has come under fire for reports that its navy paid smugglers to turn back a boat with Asian migrants in May, and officials have acknowledged using “creative strategies” to check the flow of unwanted migrants. The country has firm, strictly enforced immigration policies, and it intercepts would-be migrants and asylum seekers at sea. However, Australia did take in 4,400 refugees from Syria and Iraq last year, and the government says it plans to increase that number.

GERMANY is the main destination for many hopefuls. From 2011 to this year, Germany received nearly 100,000 applications for asylum, but 100,000 more reached Germany last month alone as the crisis mushroomed. Europe’s strongest economy is bracing for 800,000 asylum seekers this year and cautions that other European Union partners must shoulder the burden or the entire open-border policy of the European bloc could be in danger.

SWEDEN is another coveted destination. Among European countries, it has taken in the most people relative to its size of its population and last year alone admitted 80,000 refugees, more than a third of them from Syria. The Scandinavian country’s welcoming policy, including near-automatic residency and government programs for integration, have made Sweden an attractive destination.

FRANCE said Monday that it would take in 24,000 refugees under a European Union-wide quota system that some member states are almost certain to reject.

BRITAIN said it would take in 20,000 Syrian refugees by the end of the current Parliament’s term in 2020.

Other European nations have been considerably less eager to embrace the beleaguered foreigners, most of whom are Muslim. HUNGARY has begun erecting a border fence, and Prime Minister Viktor Orban has drawn criticism for comments about the need to preserve Europe’s Christian character.